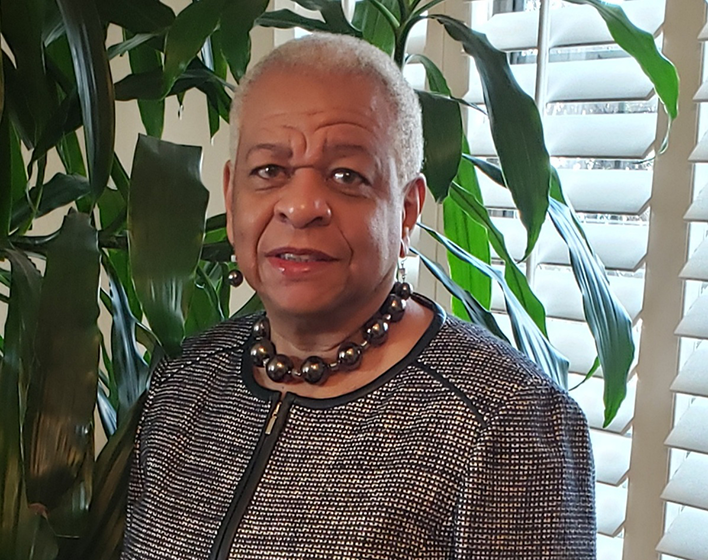 For Yvonne Mosby, Palo Alto Networks’ Senior Purchasing Analyst, this image was particularly meaningful: similar in age to Ruby Bridges, she was one of the first African American students to integrate McArthur Junior High in Beaumont, Texas. “I was older than she was [when I was in that situation], but to think of her as a little child, she is my hero.” While Ruby walked alone, Yvonne had 17 other African American students with her. “I had support [from other students and my family], but it was a challenge. I’d come home and my mother would say, ‘I can’t console you, because you have to go back again tomorrow.’”

Yvonne parlayed this strength into a successful multi-industry strategic sourcing and contract-management career, traveling the world for companies including Siemens Medical, Boston Scientific, GAP, Nestlé, and Johnson & Johnson. Across many international negotiating tables, she persevered over outdated attitudes about women and African Americans and was always able to exceed goals and deadlines to provide value to her employers.

“Near and dear to my heart is training. Just this year at Palo Alto Networks, I’ve been involved with the launch and training of Ariba, which closely aligns with my passion for training and mentoring high school students, college interns, and those early in career,” she says.

As part of the team tasked with the extremely high-profile transfer from one procurement system to another, this was a truly impactful project for the company. And now, she personally processes 40% of all purchase requests (PRs) that go through the company and makes recommendations for continuous improvement through automation, which helps all employees. It was through Yvonne’s ever-patient guidance while I’ve tried to open tricky PRs that we originally met. She’s never failed to reassure me that we would persevere through whatever issue I was trying to overcome.

Yvonne has contributed greatly to our community in the education sector, from years of mentoring youth in the area of workforce readiness to serving on a California state education task force. The task force contributed to the implementation of teaching methods known as service learning for community service credits at the high school level. Tommy Lindsey, 2004 MacArthur Fellow, recognized Yvonne for service to California state high school forensics programs. Yvonne credits her upbringing to her life of community service. Her mother was one of the first African American nurses in Texas, and her aunt was a respected civil rights leader. This transcends to the extremely close and tight-knit family Yvonne has built in her 40-plus-year marriage to her husband, Carl, son Carl III, and daughter-in-law Autumn. Their granddaughter, Trinity Mosby, spoke at the 2020 Black Womens’ March at the California State Capitol. Trinity’s brothers, Jaxon and Elijah, are part of the village.

She’s contributed greatly to her workplaces as well: Her efforts in the I & D space at Nestlé resulted in her profile being included in a book titled Women of Courage along with civil rights icon Rosa Parks, whom she met at the book launch event. She enjoys Palo Alto Networks’ culture of inclusion and diversity. “The company has taken a leap in communicating diversity numbers that have to be improved. There is commitment at the executive level to positive change and to inclusion being non-negotiable,” she says. “I’m proud and grateful to be a Palo Alto Networks employee.”

Additionally, she cites our strong and cross-collaborative ENG network as a contributor to effecting change. “The year 2020 was one of increasing public visibility to racism and poverty in America. The call for social justice was evident in nationwide demonstrations that created more awareness of the issues past and present,” Yvonne adds. “Covid impacted all in some way. Despite the pain felt in our country, I remain hopeful that more hearts and minds will desire to create positive societal changes and desire equality for all. Our company’s generosity and commitment to communities is displayed through employees’ countless hours of volunteer work and their donations to life-improving organizations.”

Back to careers blog
Hope, Humility, and Humanity: Kevin Dunbar

A Man of Many Firsts: Laramie Mergerson
Scroll to top