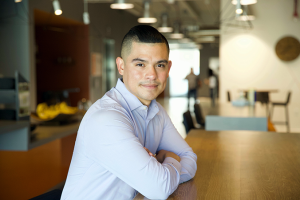 A lot of us go into our careers with a plan for where we want to go and how we’re going to get there. But sometimes we’re presented with opportunities we never planned for and discover we’re right where we want to be.

I started my career in the United States Marine Corps, where I held several positions, including roles that involved network and systems administration, telecommunications, network builds, upgrades, migrations, and more. I enjoyed that so much that I enrolled in an associate degree program in enterprise networking at Foothill College in California.

During that time in 2017-2018, I also participated in a program called Year Up, a nonprofit technical training and career development program that works with corporate partners to help young adults ages 18-24 get a head start on their careers. For my program year, Palo Alto Networks was the corporate sponsor. Because of my background and degree program, I was fortunate to be offered a six-month internship as a Desktop Support Specialist. As someone with no prior professional experience, I truly appreciated the learning I was able to do during my internship, and I worked with an amazing team. However, I still had a passion for routers and switches, for how networks are designed and built, so I was still focused on a career as a network engineer. During my internship, I made that desire well known to my manager.

In the last few months of the internship, I was placed in a rotation with the Corporate Systems Engineering team. SEs here are an integral part of the sales team, helping to convey technical information to potential customers and devising security solutions that address their needs. This experience helped not only to provide me with a wealth of knowledge about Palo Alto Networks’ products and sales, but also to connect me with a number of people from departments across the organization.

When I finished my internship in July 2018, I received a full-time offer to continue working as a Desktop Support Specialist. I knew this was a great opportunity I couldn’t pass up and I accepted right away, knowing I had a lot more to learn but also making it known what my ultimate career goal was. By August of that year, I was a full-time employee. I felt blessed to have been given this chance.

In this role, I was collaborating with a couple of network engineers in the company, and one of them unofficially became a sort of mentor to me. I confided to him that I was interested in eventually moving into the same sort of role, and he suggested that if that was truly my goal, I should gain a bit more knowledge in Palo Alto Networks’ firewalls, which was how the company implemented its network. I realized he was right — although I’d had a few courses on that at school but nothing substantial.

I reached out to the team lead in Corporate Systems Engineering whom I’d worked with during my internship SE rotation and learned that, coincidentally, they had an opening for a Systems Engineer. “I know you’re still interested in becoming a Network Engineer,” he told me, “but I think this would be a great way to learn more about our products on a daily basis.” I accepted his offer and in June 2019, I became a full-time Systems Engineer.

My plan was to perform this role for a while until I could eventually work my way into a Network Engineer position. But once I began working as an SE, I absolutely fell in love with it. I love sales, I love working with customers to help them find the right solutions and close those security gaps they have in their environments. Helping to steer them in the right direction to improve their security posture is so satisfying. I’m learning new concepts every day; it’s never boring, and no two days are the same. Sure, it can be stressful at times, but it’s well worth it. In this role there is immediate gratification in solving problems. I’m developing public speaking skills, strengthening my customer service abilities, and contributing to the important sales work taking place in the organization.

I’m so thankful to have worked with managers that were fully supportive of my desire to pursue my chosen career and willing to do whatever it took to help me get there, even if it meant leaving their teams. They weren’t going to let that stop me from being successful, and they never stopped encouraging my growth, wherever that happened to lead me. That openness on their part, combined with my openness to taking an unexpected detour on the road to my goal were what led me to a position I’m really happy in today.

Since starting this role, my goal has changed from becoming a Network Engineer to moving up within Systems Engineering to eventually work on named, major, or global accounts or even become a consulting engineer. If you’d asked me a year ago whether I’d even consider these fields, I would have said no. That’s why I’m a firm believer now in trying everything — new roles, new experiences, new foods. You just don’t know what you’re going to fall in love with.

Back to careers blog
Best of Both Worlds