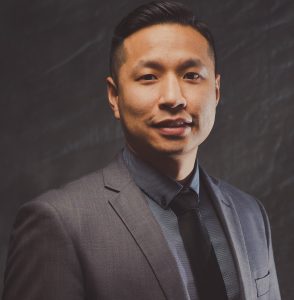 I’m a Systems Engineer for Major Accounts with Palo Alto Networks in Toronto, Canada. I’m happily married to my wife, Lily, and together we parents play with/raise our three little girls, Demi, Chelsea, and Lia. Like a lot of people who work in technology, my love for it started early on. I was very influenced by my older siblings, who did super geeky things like LAN parties, where they’d hook up a bunch of computers and play multiplayer video games inside for hours. In wintertime, all the heat from the computers would fog up the windows.

It sounds like an experience many North Americans had as kids, but there’s a lot about my background that is also pretty different.

I grew up in a really large family. I’m the youngest of four children, and the age gaps between us are significant. My oldest brother is 18 years older than I am. We were born in Hong Kong, but when I was three years old, we emigrated to Toronto, Canada. My parents, who were born in Shanghai, China, at the tail end of World War II, also came from large families — in fact, my dad was one of 12 kids — and they each had siblings who already lived in Canada, which made the decision to come here an easy one and helped smooth the transition.

Still, being immigrants wasn’t easy. I was only three, so I was shielded from a lot of the challenges my parents and siblings faced. To me, life was easy and carefree, but it’s only now, as an adult, that I realize how challenging it was for my parents and older siblings.

In Hong Kong, my parents ran several restaurants and businesses, but after moving to Canada, for the first couple of years, my dad — a former business owner and member of the Asian Olympics council — had to work at a foam factory. Money was very tight for them, especially with such a large family. A lot of things we take for granted were struggles for them … like mattresses. I spoke on the phone with my dad the other day and discovered that when we first moved here, they couldn’t afford mattresses for all of us. For a while, the whole family, including my adult brother, had to sleep together in one bed in my uncle’s basement. At one point my parents actually had to fish mattresses out of dumpsters for us to sleep on. I had never known that before, and I found it heartbreaking.

The cultural differences were a big adjustment as well. When we first came to Canada, there were no Asian grocery stores where my parents could get the staples they needed to make certain dishes. In Hong Kong, we had access to a lot of fish and seafood. My mom would use fish heads and bones to make soup or stir frys, but in Canada, they threw those out before customers could ever get them. I remember waiting with my mom outside for the supermarket to close because her friend worked in the seafood department and would save bones and fish heads in bags to give my mom.

There were other things I noticed at the time but didn’t really think about until I was much older: funny comments from neighbors who weren’t used to seeing immigrants, offensive notes left at our house or on our car, or being told there were places I wasn’t allowed to go alone. At the time, I just thought, “New country, different rules.” But now, looking back, I feel such gratitude for what my parents did for us and how they really provided us with the skills we needed to survive and thrive, while also giving us a positive experience growing up.

Eventually, they were able to buy us each a mattress, and we were able to move out of our uncle’s basement and rent our own home, and then a few years later rented a bigger one, and then a bigger one. They have always been supportive of higher education and helped all of us to go to college. These are things many people take for granted, and I am constantly reminded of all my parents sacrificed for us, for which I am truly grateful.

I’m so fortunate that my parents and several other members of our family are nearby, and we have weathered the pandemic together, which has been a lifeline for us. But even 50 years after immigrating to this country, my parents still are unable to buy their own home. Being immigrants has not been easy, but it was done in order to give my siblings and me better lives and opportunities that we might not have had in Hong Kong.

This is why I think setting aside a month to recognize Asian and Pacific American heritage is important: to highlight the fact that despite our different languages and cultures and traditions, we’re all just people. We work hard to provide for our families, share many of the same values, enjoy many of the same pastimes, and aspire to better futures. I look forward to a day when there is no need for a heritage month, when we won’t have to remind the general population of our challenges and accomplishments, and we can all see each other as equally valuable and worthy of celebration.

Covid and lockdowns have been incredibly difficult on all of us, and people seem to be digging in, focusing too heavily on the negative and pointing fingers at each other these days. But I like to think of this time as a sort of incubation period, allowing us to see things more clearly and from a different perspective. We can’t let the hate consume us — we need to find ways to overcome the hate with health, love, and happiness. As cheesy as it may sound, I think we have a lot of reasons to be grateful right now. We need to focus on that. I know from seeing what some members of my family have experienced, there are real struggles out there. Let’s look for the good and use this time to be better. If we do that, I believe that in the future, the hate will die out.

Back to careers blog
LEAP of Faith: Palo Alto Networks offers a just-right place for early-in-career...

Changing Lanes: How I transitioned unexpectedly from one career path toward...
Scroll to top