My family was not your average Iraqi family. I was born the same year Saddam Hussein took power, in 1979, and I knew nothing but war. But my parents, in their own way, were kind of rebels, starting when my dad married my mother, an exchange student from Jordan. My siblings and I were raised with their “free-thinking” mentality, which didn’t jive well with Saddam and his regime. The Ba’ath Party controlled everything, including what was on TV. In fact, VHS tapes containing western media content like news, talk shows, or even MTV were banned, like most other things. We grew up having our parents tell us, “What we talk about here at home, you are not to say in school,” because people were truly being executed for everything. There was nobody in Iraq who didn’t have a relative who had been executed. I know someone who had been jailed for talking about a dream he had to visit a neighboring country. People were dispensable, let alone their thoughts and dreams.

I learned English from American movies. Some people would put satellites on their rooftops and cover them with bedsheets so they couldn’t be detected by helicopters. I smuggled VHS tapes under my shirt and carried them home on my bike — I could have been executed for smuggling Hot Shot! Part Deux, in which they make fun of Saddam.

When you reached a certain age in Iraq, you were supposed to sign a paper swearing allegiance to Saddam’s regime. If you didn’t, they would execute you, so of course, everyone lied and signed it. Sometimes the papers would be sent around at school, or government officials would come door to door in the neighborhood. When it came time for me to sign, I told the school, “I signed that in my neighborhood,” and when they came to our door at home I said, “I signed that at school.” I would not sell myself to the Ba’ath Party, and nobody knew I was getting away with it, not even my family. I got my college degree in computer engineering, then my master’s degree, and I hadn’t been caught. But on the day of my graduation for my master’s, at the ceremony, someone from the Ba’ath Party was doing spot checks. That’s how I got caught.

They put a bag over my head, to make a spectacle out of me, and I was taken to political prison to be executed. There was no trial in court or anything, I just got a number and waited to die. We called it the meat grinder. My family and I gave up hope for my survival.

But this was 2003, the year U.S. forces invaded Iraq. After two weeks in prison, on the morning of April 9, I awoke to silence. The guards were gone. American troops were in Firdos Square in Baghdad, toppling the statue of Saddam. This was my moment — I got a second shot at life. I escaped prison and began running, saw American tanks on the streets for the first time, found someone to give me a ride, and I made it home. Still today I can’t believe I was this fortunate.

A few weeks later, on a busy street in Baghdad, I came across American soldiers and their commander trying to communicate with the local people; they had no interpreter. Here, at this point, I was angry at the world from the injustice of it all, and I saw a way to thumb my nose at the regime. A U.S. soldier was yelling at a local Imam, or cleric, “Where is your power plant? America is trying to help you!” and the Imam was yelling in Arabic, “Don’t raise your voice, this is still my country!” 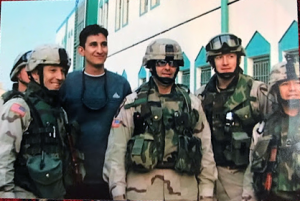 Here was my chance. Drawing on the English I knew, I spoke my first English words ever to a foreigner: “Dude, I can help. I can translate.”

The soldier was shocked. “You speak English? Did you just call me dude?”

I quickly explained that I knew some English from movies and TV, and when he saw I could help, he immediately let the other Americans know, and they took me with them.

I was fortunate to develop a good relationship with them. Although most translators working with the Americans covered their faces, to protect their identities, I saw that as having no integrity, so I never covered mine. But others like me were being executed one by one by the insurgency and the foreign Jihadists who came to Iraq seeking a “holy war against the crusaders.” One day I came home from the army base, and my dad showed me a threatening note that had been left at our house. “Don’t worry about the family,” he told me. “Just go. Do what you need to do.”

That was the last time I saw my family for 10 years. I moved to the U.S. Army base, so they wouldn’t pay the price for my “calling,” and they moved to a safe house. Soon after that, our family home was bombed. 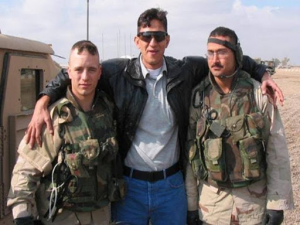 In 2005, a production company came to the base to make a documentary about the invasion of Iraq, and when they learned my story and realized they needed a translator to help subtitle their film, they offered me the opportunity to come to New York. So with a special visa, only $700 in my pocket, and instructions from the military guys to “eat at Subway,” I came to New York. (Unfortunately, they never told me it was a sandwich shop, so for three days I starved because I kept going to the subway station looking for food!)

I eventually figured things out, and when my work in New York was through, I went to Fort Hood in Texas for reunification with the military unit I had worked with last. I also got to connect again with an Army colonel with whom I had worked as a personal interpreter back in Baghdad. He was originally from Minnesota, so after my six months of working with the unit were finished and he was preparing to retire, he said to me, “I’m about to start a new life as a civilian. You’re about to start a new life, too. Have you seen snow before?”

I told him I hadn’t, and he said, “Well, there’s a football team there called the Vikings, and they’ll keep letting you down. We survived a roadside bomb. Let’s go survive Minneapolis.” So in 2006, I was given political asylum and followed the retired colonel to Minnesota, and was lucky enough to get my first job at Saint Paul school district working with computers: unboxing and imaging them for schools. In 2013, I officially became an American citizen. It was one of the happiest days of my life, similar to the day I got out of prison.

Before long, someone realized I had a master’s degree in computer systems networking and telecommunications, and I was given a promotion, and then another. I worked my way up to IT Services Manager for Saint Paul Public Schools, then to Director of IT Services Management at Minneapolis Public Schools, then to its Chief Information Officer (CIO). And in 2019, I became the CIO for the City of Minneapolis, where, in 2020, when Covid hit and the death of George Floyd sparked riots, I first worked with Palo Alto Networks to secure the city’s information infrastructure. I was so impressed with the company’s cybersecurity work and its impact that when a position came up at the end of the year, I applied and was eventually hired.

I’ve never had a bad day since I came to America. Every morning, when I wake up, hear people speaking English, and see the snow falling outside, I realize I’m an American, and I’m safe. I feel gratitude every day for this. Although my mother passed away from cancer and I never got to see her again, I’m happy to say that my father, brother, and sisters all managed to escape Iraq, settling in Sweden and England. We are all safe.

I don’t think people truly understand how fortunate we are to be Americans, or what many of us who have immigrated here have experienced. To explain what Asian and Pacific American Heritage Month means to me, I’ll share a story. The other day, I was in an Uber, and the driver was from Mexico. We got to talking about many things, particularly the corruption in the governments of our home countries. We had a conversation about how this doesn’t happen in America, and we started wondering what makes Americans different from people elsewhere in the world.

Then we started thinking about this country’s history, all it has gone through to become what it is today, and eventually we came to the conclusion that there is no such thing as Americans. What makes this country special is that it is made up of people from everywhere — Europe, Asia, the Middle East, South America, Africa… This month is important because it’s one way in which we can celebrate the contributions of every immigrant in helping to make America what it is today.

Pirates were the biggest concern for those sailing in the Gulf of Thailand, as they had been known to slaughter innocent people, so we took the long way to avoid them, meaning that our journey took 10 days instead of the three we’d expected.

By: Wailohia Woolsey, Director, InfoSec GRC We are proud to recognize the launch of Aloha ‘Aina, a new employee network group focused on Native Hawaiians, Pacific Islanders (NHPI) and their allies. Vision