This May, which is Asian and Pacific American Heritage Month, marks an important anniversary for me. It was this month in 1975 when my home country of South Vietnam ceased to exist, and Vietnam became a unified country under Communist control. And it was in May of 1982 when I fled the communist regime, becoming a refugee.

After the Vietnam War ended in 1975, many people in democratic South Vietnam made plans to escape the grip of communism, which had made our living conditions unbearable, with starvation, loss of livelihood, and even re-education in camps where torture, starvation, and hard labor were common. To escape, I would become one of the thousands of Boat People who escaped by sea to freedom. 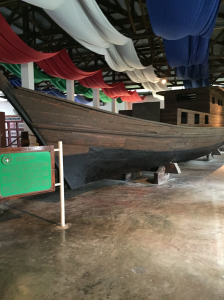 I was 16 years old when my sister and brother and I, along with several cousins, left Vũng Tàu in South Vietnam in a tiny, rickety, open fishing boat, with 44 other refugees. Our parents stayed behind because if you left your house for longer than a day, the government would confiscate it and the family, if they were not successful, would have nowhere to go. Leaving would give my siblings and me a chance at a better life.

We had to escape at night, illegally, hiding in people’s homes until we reached the beach. Every person on the boat was supposed to bring a 20-liter can of either water or oil, for just over 20 cans each. But as we approached the beach, rumors reached us that the police were chasing us, so we all ran to the boat.

In our rush, many of the escapees dropped their cans. As we began to sail for our destination, Malaysia, we realized that we only had 22 cans total, and 20 of them were oil. We only had two cans of water for 45 people on what was a 10-day journey by sea, and much of it had already been drunk. We began to ration our water by the spoonful; each person would get a teaspoon of water a day, just to keep our mouths wet. At first, we felt strong, but soon the seasickness came over us, and that made the lack of water worse. Our bodies began to deteriorate after several days at sea. At one point, I felt so thirsty that I tried to drink some of my cousin’s urine — it tasted terrible!

Pirates were the biggest concern for those sailing in the Gulf of Thailand, as they had been known to slaughter innocent people, so we took the long way to avoid them, meaning that our journey took 10 days instead of the three we’d expected. And we frequently saw ships that we hoped would save us, so we waved at 65 of them (yes, I counted personally), but only one saw us — it turned out to be from the U.S.S.R., one of communist Vietnam’s allies, so we had to turn away from the ship. But I also saw one of the most beautiful sights of my life during the two-week voyage. The sun was setting and a school of dolphins began racing our boat, jumping out of the water, almost close enough to touch.

Our journey took place right before monsoon season, and we suffered a massive storm that tossed us around so much we had to wrap the boat in a fishing net to keep us from falling out. But we were so happy because it was raining; we used ponchos to collect water, so we had enough to drink until we reached land. 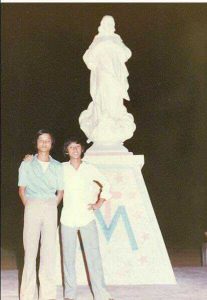 An army ship on the island directed us to the refugee camp in Malaysia, where we would find out where we’d end up next; only a few countries were accepting Vietnamese refugees. Because one of my brothers worked for the U.S. government before the war, we were allowed to go to the United States. In two and a half months, I transferred to a transitional camp for several months to learn some basic English and American culture, and then we were sent to Tucson, Arizona, where there was a family who was willing to take us in. After two months there, we received refugee aid money from the U.S. government, and my brother left Texas with his family and picked us up, and all of us relocated to Silicon Valley, California, where I have lived ever since.

Because we didn’t have much money, we had to move every couple of years, but I was lucky to be able to attend a local city college, where I studied electrical engineering during the day. At night, I would work from 7 p.m. to 7 a.m. as a semiconductor tester. I also really loved music and wanted to learn how to make music. Of course, I really wanted a Macintosh computer for this, but I couldn’t afford that, so instead, I bought a cheap computer with one megabyte of memory and 40 megabytes of hard drive. But it broke all the time, so I had to learn how to fix it because I couldn’t afford to pay anyone else to do it.

Because I had taught myself to fix my computer, I applied for a job at a company called Digital Equipment Corporation, or DEC. I told the hiring manager, “Just give me a one-week trial. If I don’t cut it, and if I can’t serve your computers appropriately, you don’t even have to pay me.” So he did. One of the site managers, Joe Dixon, was so happy with my work that years later after he’d left the company, he gave me an opportunity at his new company. After that, every couple of years, I was given opportunities to continue moving forward. I was officially granted U.S. citizenship in 1987, and I eventually grew in my career to become an Asset Management Specialist at Palo Alto Networks, where I have been very happy!

In the last couple of years, I have been frustrated, angry, and sad to see what’s happening at America’s borders, where immigrants have been refused entry, despite the horrific conditions in their homelands, and separated from their families, robbed of their dignity and basic human decency. I think about my difficult journey by boat, surviving dehydration and storms, and I think about the opportunities I’ve received that they are being deprived of. That’s why I’m so happy to see us celebrating Asian and Pacific American Heritage Month, because even when immigrants succeed as I have, we can’t forget the people we leave behind. I’m honored to be able to tell my story and look back to see that I have achieved success and am happy. We need to work to make this a country that celebrates its diversity so that others have the same opportunities that I had.