Frog in a Well: Employee Network Groups Expand Your View of the World

There is an old Hindi tale about kupamanduka, which translates to “frog in a well.” In the story, the frog imagines his well is the largest water body that exists and that the small circle of sky he sees above is the limit of the horizon. In his ignorance about the world, he is happy, but the tale offers a cautionary note about the dangers of insularity, which can lead to intolerance and a lack of personal growth or understanding of the world. In the technology sector, where innovation relies on a wealth of diversity, staying in the well can keep you from being successful.

I am originally from a small valley in the Kashmir region of India, where we were isolated and had limited visibility and access to the rest of the world. In short, I was a bit like kupamanduka. It wasn’t until I left for college in urban Bangalore that I came to realize how many different cultures and languages were spoken within India, and I began learning the nuances of other people’s culture like never before. It was only the beginning of my personal transformation as I moved to the United States soon after my bachelor’s degree to work and study for MBA at University of Arkansas.

We often hear of people in technology coming from Asia to the Bay Area, where it is possible to remain inside a bubble with people just like me. I believe if I had done that, to begin with, I wouldn’t have learned as much about American culture as I did. I was in the middle of nowhere and took a job working for Walmart — an American institution I had never heard — and I was one of the first Indians they had hired. It was a very monochromatic culture, mostly white and a few African Americans, so I really stood out as different. I am intensely curious by nature, and during my time there I learned a lot about American culture, had my portion of cultural gaffes, understood better the way Americans do things, and I built a lot of friendships. But I also experienced, outside of work, instances of racism and bias that are inherent with people who are ignorant or don’t know enough about other cultures beyond the stereotypes they’ve heard. I had to overcome that and was extremely fortunate to have really good friends and mentors who stood by me; we learned from each other and expanded our horizons as a result. 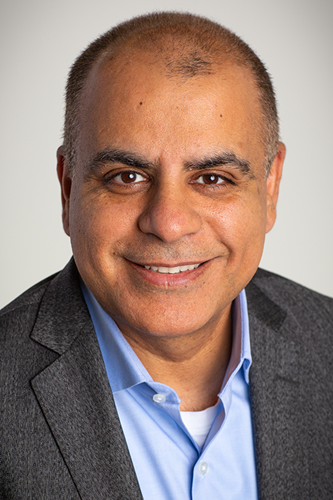 There are 48 countries in Asia, and roughly 25 of those are represented by employees here at Palo Alto Networks. For many non-Asian people, their understanding of those countries as distinct, and of the great diversity found among Asian people, are a lot like the frog’s — greatly limited. Ensuring that our Asian employees feel heard, understood, and supported and that others within the organization have the opportunity to learn from them and expand their understanding of the world, are top priorities in this organization. That’s why the InnovASIAN employee network group (ENG) was established in early 2020, joining a whole host of ENGs for a wide range of underrepresented populations within Palo Alto Networks. When I was approached about being the executive sponsor for this new ENG, I saw it as a great opportunity to expand horizons for myself and our employees.

As executive sponsor, I’m not leading or making decisions for the group, but I’m helping by offering guidance, advocating on behalf of the group to inform decision- and policy-making, and lending executive-level perspective to education and events. I can help spread the word about activities and discussions the group is developing, and lead by example by participating in them.

I’m able to use my role to offer guidance on career growth among our company’s Asian community — providing advice on finding mentors, taking on new responsibilities, and developing professional skills — and I can play an active role in trying to eradicate biases by helping our group to be external facing and educate others about our cultures, mentorship programs, through activities such as fares of Asia, making foods native to their countries, or participating in cultural holidays or observances. For example, for Diwali, the Festival of Lights, we welcomed our company CEO and Chairman Nikesh Arora and President Amit Singh to participate in making chai (tea) and share what Diwali means to them. It’s education that feels approachable, not onerous, and yet is powerful in how it allows people of different backgrounds to feel connected.

Since coming to America, I’ve seen that what makes us great is the diversity of thought and ability to surround ourselves with people from all walks of life and learn from each other, regardless of caste, color, or creed. It is only by doing this that we “frogs” can see beyond our wells and truly understand the world. That’s the power of an ENG.

Building Community in the Workplace: The Power of Employee Network Groups

'Tis the Season to be Cautious, Fa la la la la, la la la la Before we get into the note of caution, for those currently observing Seasonal Holidays around the world, we’d like to wish you all a joyful and safe time with your loved ones. For many of…